Have jewellery to sell?

By the 1950s the wartime years were well and truly over and spirits were high, despite the slow recovery of wealth. While still bigger, bolder and more colourful than the pre-war era, jewellery took on a lighter tone, along with women’s fashion.

1950s designs reflected the growth of the upper middle class and the return of expensive materials such as platinum and diamonds.

Large, colourful gemstones surrounded by diamonds and long strings of real pearls were a popular choice for those who could afford them, while costume jewellery became more sophisticated to meet the demand of the masses and it could be hard to pick out the fakes. 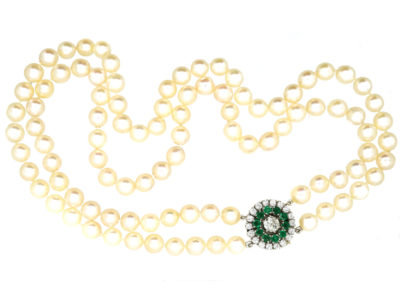 £ 3500
A fabulous double strand culture pearl necklace. The highlight is the amazing 18ct white gold emerald and diamond cluster clasp with a one carat diamond in the centre. It can be worn as a centrepiece on the neck. The pearls are a lovely milky white colour and are very well matched. It is a stunning look when worn. } 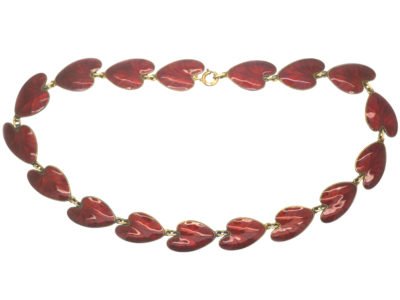 £ 675
Finn Jensen was apprenticed to J.Tostrup then he became an independent designer and manufacturer of high quality vermeil guilloche enamel jewellery from 1953. The workshop continued after his death in 1976. This silver gilt lily pad necklace was one of his signature designs and was made in the late 1950s. The translucent red enamel reveals an etched lily pad leaf design in the silver beneath. It is a timeless piece of jewellery. } 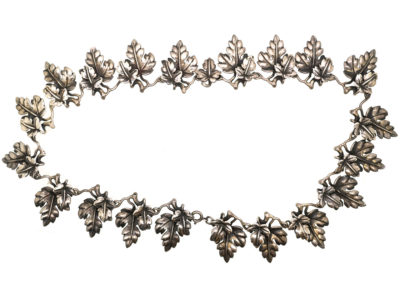 £ 1500
Bernard Instone (1891-1987) produced a large amount of interesting jewellery through the middle part of the 20th century. It was always characterised by flowers, leaves and semi-precious stones or different coloured enamels. His pieces are collected today because they were beautifully designed and executed. This is a great example of one of his matching sets of a necklace, bracelet and earrings. They are presented in a Liberty of London case. } 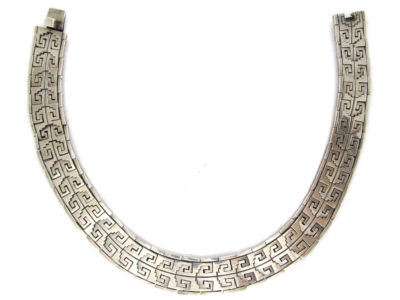 £ 975
A stylish and striking Mexican silver collar made circa 1950-1960. The design is inevitably based on Amer-Indian motifs and the whole necklace articulates in a curve around the neck. It was made in the town of Taxco, well known for its brilliant makers. } 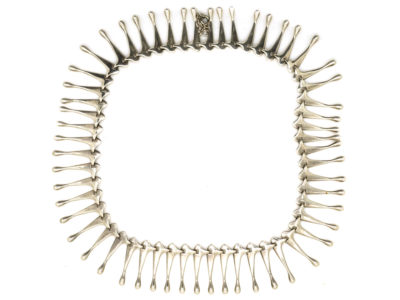 £ 975
A very smart silver fringe design collar that was made in Scandinavia. It is based on a fish skeleton design and looks wonderful when worn. } 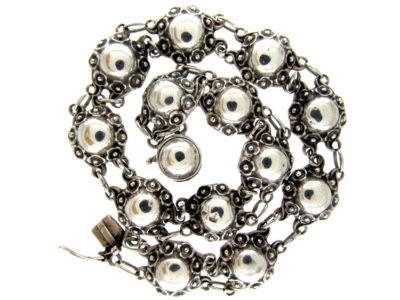 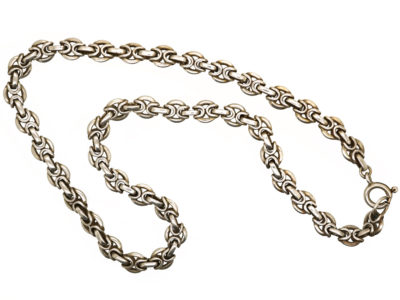 £ 375
A good looking and useful silver necklace with interlinking links. It can be worn daily. } 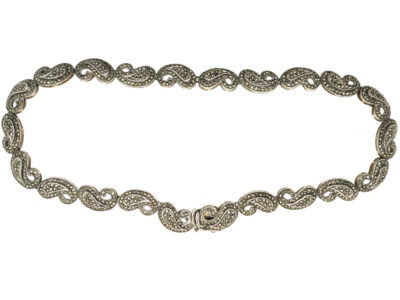 £ 675
A silver articulated necklace composed of 22 paisley design sections that was made in the 1950-1960 period. It is well made in heavy gage silver and looks fantastic on the neck. }
№ Item Hot Rare Find
View Full Details

Please fill in the form below to discover how much Interest Free Credit you are eligible to spend with the AJC.