Have jewellery to sell?

An impressive signet ringA ring with a central plaque on which one’s initials, a seal, or a crest is engraved. More that was made in the 1920s in America. It is set with a syntheticA man-made material with essentially the same optical, chemical and physical properties as its natural counterpart, but completely artificial. Commonly used for calibré settings due to the colour matching possibilities. More sapphireBlue is the best-known colour for this gemstone but it can be found in all colours of the spectrum. After diamond, sapphire is the hardest gemstone.
More.

The history of the synthetic gemstone is interesting. In 1873 Auguste Verneuil, who was based at the Museum of NaturalA natural stone is called such because it has not been subjected to any treatments.  More History in Paris, began to work to synthesize corundum. In 1876, after many experiments, rubyOne of the most valuable gemstones on earth. From the corundum family, the red variety being ruby and the blue, sapphire. With the exception of the diamond, corundum is the hardest of the gemstones on the Mohs scale scoring a 9. More synthesis was understood and repeatable although it was not understood how sapphire, called, “bug juice” synthesis took place. The blue corundum colour that was created was not a fine blue colour and the process could not be repeated.

In 1886, Verneuil, a gem expert and Fremy worked together with Jannettez while they were still at the Paris Museum of Natural History. Verneuil came to realize that fusing powdered alumina and chromium with the oxygen hydrogen torch made synthetic corundum.

At some pointA unit of weight for a diamond, being one-hundredth of a metric carat. It is used for weights that are decimal fractions of a carat, and all figures after the second decimal point are, in the diamond and jewellery trade, generally discarded. More between 1886 and 1892, Verneuil discovered flame fusion. Later he realized that using different elements would create other synthetic gemstones such as synthetic ruby.

In 1909, Vernueil realized that synthetic sapphires could be created with the addition of iron and titanium and in 1911, he and his employer, the Heller Company, were given two patents for this discovery.

So this was a revolution in the gem industry and many pieces of jewellery made after 1909 and well into the 1920s and later were often set with a mixture of synthetic and natural stones. It was acceptable and was often used to get the right colour match.

In signet rings such as this example the synthetic stone has been beautifully cut with an intaglioAn engraved stone, the opposite of a cameo, with a recessed design cut below the surface of the stone. Intaglio designs are common for signet rings and fob seals. More of a crest.

We’re pleased to offer our customers in the UK the chance to spread the cost of this item with up to 12 months Interest Free Finance.

You can apply for Interest Free Finance at Checkout and choose between 3, 6, 9 or 12 month timeframes to pay off the cost, with a minimum deposit of 5%.

The online application process is simple and takes around 5 minutes to complete, with a decision often being made about 30 seconds after completion.

Please note that the finance calculations above are approximate figures

Am I Eligible for Interest Free Credit? 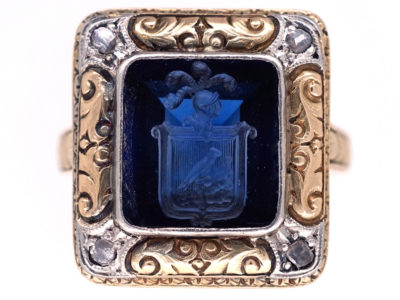 119H
Print Out This Item

Buying antique jewellery is both ethical and eco-friendly as harmful and destructive mining processes are not needed to make an item yours. So give yourself a pat on the back!

We always stay true to our core values, embodied in The AJC Guarantee:
Quality, Rarity, Knowledge, Peace of Mind and The Personal Touch 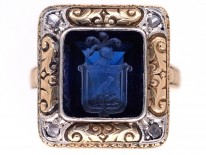 Please use the form below to let us know you are looking for something similar to this item.

Please note the specifics and include a price range if desired. The more information you provide, the better we can be of assistance.

Alternatively you can call us directly on +44 (0)20 7206 2477 or email us at enquiries@antiquejewellerycompany.com.

Constantly buying, we add to our website collections daily so something may be just around the corner. Or, as we continue to buy, we will keep your requests in mind.

While every piece of antique jewellery is often unique, we are happy to notify you if we find something similar.

Go the extra mile and house your special ring in one of our luxury, sustainably sourced boxes, handmade exclusively for the AJC in a small town in Suffolk.

Please note that all our rings come with a free Standard Box. We think they're very pretty too! For more info on our standard boxes click here.

We are pleased to offer Free Worldwide Delivery on all orders

Sent by DHL
Arriving end of next possible working day

* These are estimates only and can vary slightly

International and want your package to arrive super fast?

Our jewellery is Conflict Free and Eco-Friendly and when purchasing an item from us you can be sure you are not contributing to any unethical procedures.

When buying new jewellery you can never be 100% sure that they are not conflict free.

Choosing antique means:
To see how authorities are trying to combat conflict diamonds visit the The Kimberley Process website

At The AJC we stand behind every item we sell with a 100% Satisfaction Guarantee and are confident that your jewellery purchase will exceed your expectations.

However, if you are not entirely satisfied with your purchase, we offer a Full, Money-Back Guarantee on all purchases.

Please make sure you notify us before you return your item/s.

We will accept returned goods for a refund under the following conditions:

We value our customers' peace of mind over everything.
We therefore created our 5 point promise.

We take great pride in our collection of antique jewellery, one that embodies only the very best from across the ages. Under no circumstances will you find any reproductions and, unless stated clearly, all our items are in good condition and 100% original, free from enhancements.

All our items are one-offs, quite often commissions, meticulously handmade by skilled craftsmen of old. With the steady increase in international, mass-produced jewellery, our antique jewellery has a timeless beauty and charm that simply cannot be replicated.

With over 35 years of experience in the London trade, Olly Gerrish has a reputation as one of London's leading antique jewellery authorities; only the best examples from her stock are selected for the site.

Investing in a piece of antique jewellery can be a daunting process. We value our customers' confidence and peace of mind above all and strive to uphold a culture of trust and decency at all times. Our reputation for providing expert advice and support for our customers should reassure prospective customers. Should a customer for any reason be unhappy with their online purchase we will not hesitate to offer them a 30 day full money back guarantee.

Finding the perfect piece should be a fun and enlightening experience. To help achieve this we are here to lend our customers a helping hand and provide impartial expert advice. Building lasting relationships is far more important to us than a quick sale.

We are pleased to offer complimentary sizings on all ring purchases, undertaken by one of the best jewellers in the business.

Sometimes it can be tricky finding out her size without being caught. In these circumstances we recommend saving your free sizing until after you've proposed orthe recipient has received their ring. Just send your ring back to us via secure post or visit us at our London showroom and we will measure your partner's finger and take it to get sized. Free sizing will remain valid for 1 year after purchase.

We thought you'd like to know that has been eyeing up our Art Deco 18ct Gold, Platinum, Rose Diamond & Synthetic Sapphire Crested Intaglio Ring for some time now, and has requested us to bring this to your attention. Don't shoot the messenger...

We accept the following forms of payment:

We offer our customers in the UK the chance to spread the cost of their purchase with up to 12 months Interest Free Finance.

For more information on Finance and to check your eligibility click here.

Please fill in the form below to discover how much Interest Free Credit you are eligible to spend with the AJC.

Continue Shopping
For further information on our Interest Free Finance please click here.
Want to Share This?Email it to a friend
Email sent!